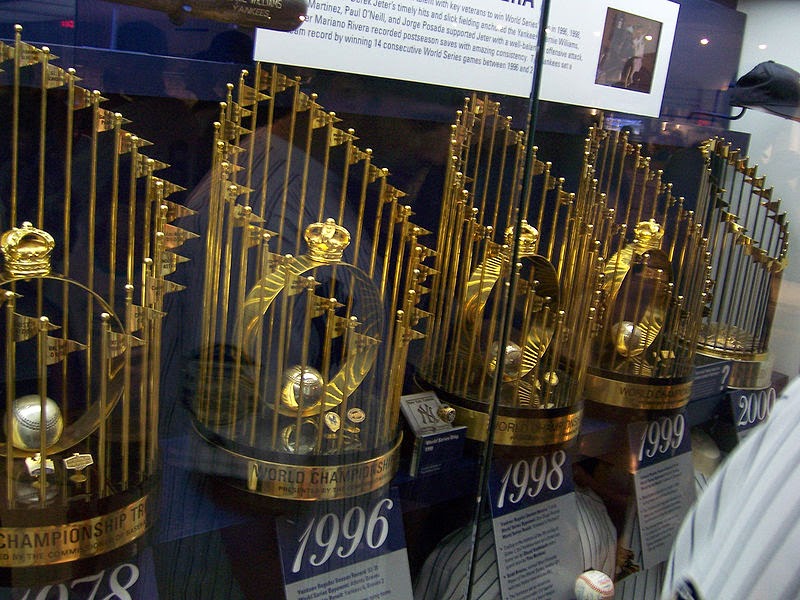 Photo By: Wikimedia Commons
In four days, the Major League Baseball season will officially begin. Opening day ceremonies will be held around the league. The All Stars, Sluggers, and Superstar Pitchers are ready for WAR.

Fantasy League Baseball Owners are familiar with Wins Above Replacement also known as WAR. It’s a new term, so if you’re a baseball fan and have no clue, you’re all right.

The emerging Mike Trout from the Los Angeles Angels of Anaheim is considered to have the best WAR stats in the game. He is highly agile, quick, and a game changer. He hits for power and speed.

Mike Trout launched to space in 2012. He compiled some of the best statistics Major League Baseball has ever seen. In 2013, Trout repeated his prowess.

Mike Trout exploded during his 2012 season. He hit 30 homeruns and stole 49 bases. What's more, he repeated his prowess in 2013. This was enough to give the outfielder the Rookie of The Year Award. Trout finished second in the Most Valuable Player (as a rookie) election behind Miguel Cabrera.

Miguel Cabrera also has one of the best WAR stats in baseball. Cabrera is the best power hitter in his generation. It is undeniable. Whenever, the Detroit Tigers infielder steps up to the plate the opposing pitcher sends up a prayer. Heck, if Miguel Cabrera puts his pinky toe in the on-deck circle, the other team starts panicking.

In the offseason, the New York Yankees acquired Masahario Tanaka. You should pay attention to the Japanese sensation. The Yankees inked the Superstar Pitcher a $155 million dollar contract. Only time will tell if the money was well spent.

In the meantime, let’s put things in retrospection. Masahario Tanaka pitched a perfect season last year in the Japanese League. Check out his stats  He is a phenomenon.

Another pitcher you should watch is Clayton Kershaw. Kershaw is one of the most consistent and dominant pitchers on the pitcher’s mound. Furthermore, the Los Angeles Dodgers have an impressive roster. If you’re ever in Las Vegas bet on the Dodgers.

I would gamble on the L.A. Dodgers chances in the 2014 World Series. I think the Dodgers will win the West Division and the National League Pennant. Also, I think they could win a competitive World Series either against the New York Yankees or the Boston Red Sox.

Remember, where you heard the prediction first. Guru Jay told you so all along. Here’s a cool video if you’re into gaming. You may want to grab MLB 14: The Show off the shelves.

I was an all-star baseball player in high school. I hate to brag but I played the best defense on the diamond. I made plays that were impossible look easy.

You may say: Guru Jay, get out of here. But, I started four years as a leadoff hitter. And, on occasion I batted in the three spot. In my senior year I won the Scholar Athlete Award, which was across all sports.

Baseball is America’s National Pastime. Today, baseball is played in over 115 countries. It’s my favorite sport. Many of my good friends are former teammates.

Watching baseball is an essential part of my lifestyle. Of course, I watch baseball in a different lens than everyone else. I am constantly monitoring for grand slams, walk off homeruns, and no hitters.

The beauty of the game of baseball is the incredible history. You have the capability of comparing players from different generations. If you like this article and want to start watching or playing baseball, remember no one is better than Babe Ruth. Please, don’t forget it.

Babe Ruth is legendary. Legends never die. He won seven World Series. Also, he has the best stats known to man. No one and I mean nobody comes close to his dominance at the plate and around the bases.

Why Babe Ruth is Better

Trust me, Babe Ruth is better. Search his stats. Did you know Babe Ruth was a pitcher too? Name someone today that pitches strikeouts and hits homeruns.

The Legend of George Herman Ruth, Jr. will last as long as baseball itself. Here’s rare video footage of the legend from 1932. Babe Ruth is baseball. Baseball is Babe Ruth.

And yet, I still believe in the future of baseball. Mike Trout and Miguel Cabrera have proven greatness is still alive. There are other living legends, but these two embody the impossible.

Yes, steroids ruined baseball. I am not going to gloss over the fact. The game is still tainted. However, as baseball cleanups true talent is showing.

Let’s not throw baseball under the bus. There is nothing wrong with the game itself. The cheaters are the problem.

Baseball is at the forefront of sport integrity. When was the last time a football or basketball player got tested for PEDs? Let’s get real. We love baseball for a reason, and that’s why it is a National Pastime.

Mike Trout is poised for superstardom. Look at this video from Super Epic Highlights Now do you see why I keep plugging Mike Trout, Mike Trout?

Finally, do not forget about Miguel Cabrera. He has done something very few others have done. He won the Triple Crown in 2012. And, that’s the main reason Mike Trout did not win the MVP.

Furthermore, Cabrera came close to winning The Triple Crown two years in a row. Re-live Cabrera’s triple crown here. If he continues, at this rate he will be one of the top ten baseball players of all time.

Stay alert. The 2014 MLB season is underway. In four days, the Los Angeles Dodgers will play the Arizona Diamondbacks.