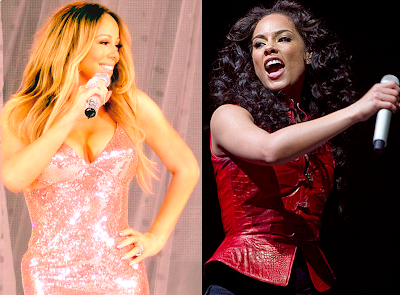 Carey is notorious for lip-synching. Alicia plays the piano in addition to hitting high notes for a hobby. But, in the studio it is a different story.

Mariah has made many great albums. Now, Alicia Keys can do wonders in the studio as well. I just appreciate Mariah Carey’s career.

The My All songstress blazed the trail for Alicia and Beyoncé. She worked harder to get to the top. So, let’s recognize Carey’s contributions.

Carey is the greatest female vocalist. This doesn’t mean she can sing better than Keys. It just means that Mariah’s voice is more flexible. She can stretch her vocal chords farther.

The Girl on Fire songstress owns her songs. She’s more in control of her pitch, tone and mechanics than Mariah. However, Carey is scary when she’s at her best.

Have you ever seen a bad Alicia Key’s performance? I’ve never seen her bomb. The poetic singer is persistent and consistent. I enjoy listening to Alicia’s songs because of their brilliant lyrics. She is a superb songwriter.

That’s why there’ s no comparison. Alicia Keys usurped Mariah Carey after the ‘No One’ hit. Since then, Alicia’s been headed one direction.

So, for the record I listen to both singers. They are tremendously talented. I choose Alicia over Mariah, because I like her body of work better.