Who is the Best Action Movie Star? Matt Damon Vs. Tom Cruise 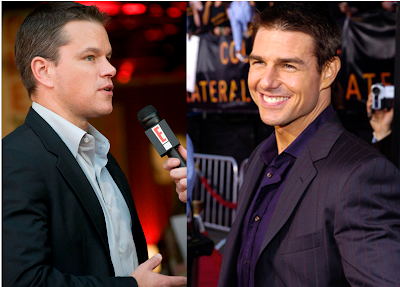 The Mission: Impossible and Bourne franchises are the best action movie series to date. Tom Cruise and Matt Damon bring their badass characters to life with their intensity. They kick butt like Cristiano Ronaldo strikes Soccer balls.

Whether you want some action or not, they will give it to your ass. Over the past 15 years, they’ve built a good reputation. Today, they’re known as the shiniest Hollywood movie stars.

The Bourne Supremacy ranks in my top 10 favorite action films. I will always remember this Supremacy scene.

What is brilliant about this sequence is that they’re using their fists instead of guns.

How does Matt Damon make you believe he is Jason Bourne? Like a Mark Wahlberg movie, Damon transforms before our very eyes. Clearly the highly trained actor understands how to captivate his audience.

In 2002, Matt Damon suffered his first identity crisis as Jason Bourne. His character had more passports and code-names than the President. What is more, Bourne Identity made a great first impression on moviegoers.

The third installment, Bourne Ultimatum, exceeded expectations at the box office by grossing over $440 million worldwide. Ultimatum is by far the trilogy’s highest grossing film. After its completion, Matt Damon entered Hollywood’s elite hall of entertainers.

You can see how Tom Cruise and Hoffman feed off each other’s energy.

Because of their similarities, I suspect Tom Cruise influenced Matt Damon’s career. The Top Gun sends competition into Oblivion. However, unlike Damon Tom hasn’t won an Academy Award. The judges are out of touch. If the Academy is worth its weight in salt, Tom Cruise will eventually receive an Oscar.

I personally think Tom Cruise is one of the greatest action movie actors of all time. Additionally, I believe the Bourne franchise with Matt Damon sets the tone for the next generation of stars. In a nutshell, Matt Damon is a top action figure but Tom Cruise is best.